skip to main | skip to sidebar

Does summer in Maine really start this weekend?? It has been raining here for what seems like weeks. I do remember one or two days of sunny 80 degree days in the last three months! Mother nature had better get her act together!!!

I cannot believe that it has been six months since my last update. WOW!! I will try to remember these past months.

We flew to Florida in March to visit Andy's parents, and Camden has 14 days of very watery stools. We contacted Boston who connected us with a pediatric gasteroenterologist in the Tampa St Petersburg area. Camden underwent labs, xrays, and two sets of stool cultures. Everything was completely normal. So we were left with no answers except is may have been a viral infection and Camden took two weeks to return to "normal".

We were in Boston for clinic in April. At that time we had not used Camden's Mik-key button for three months. His weight was steady, but not significant, so the tube stayed in:(. We had hopes that it would come out. We did switch from neocate formula to whole milk, which he did great with!!

On May 5th I got a call from the daycare to say that Camden's G tube had broken off. YIKES!!! So I called Andy and he went over to investigate. The valve had broken completely off, the balloon had deflated, but the inner part of the tube was still at skin level. So Andy took him to the Emergency Department where I met him. They contacted Dr Jaskick's office and spoke with him about the problem. When asked if they should put a new tube in, they were told to leave it out!!! The plan was to take it out in June!! So my little man is without any tubes!! The site did not even leak and is healing very well.

This week we returned to Clinic at Children's Hospital, and were pleasantly surprised that his weight was 22 pounds, 12 ounces (10.35 kilos). They also were happy to see progress on a bit of a growth curve too.

The new plan is to decrease the amount of milk per day, he is now drinking between 30 to 40 ounces of milk a day! This will hopefully increase solid food intake.

Next week Camden starts in the next classroom up at daycare. His buddy Alec is moving up with him! It is more structured, and he is with more mobile kids, rather than with the babies in his current classroom. 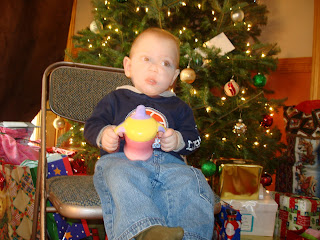 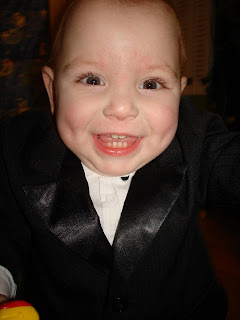 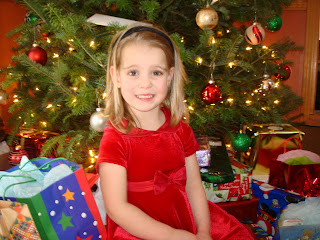 Has it been over a month since my last post? Time is flying!! Things have been hectic, hopefully 2009 will be calmer.
Camden has been in constant motion since he started walking. He only stops to eat and nap. He loves to dance too. He has become the dancer in his daycare room. He also has been babbling up a storm too. he tries to mimic words, says about 10 words, and will "go get your bottle" or "go get your ball" on command! He certainly is a little man now!!
We have been digging out from the snow and scrapping off ice. We spent Christmas Eve at my mom's with my brother and his family. Except for the fact that Bob was feeling under the weather, we had a great time. Christmas morning we were all home and Maddie really enjoyed opening presents. Camden enjoyed playing with the boxes and wrapping paper! Of course they both were spoiled! That's what what kids are for! 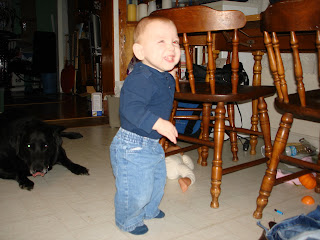 What a big boy!! He is now trying to keep up with his big sister! camden had a weigh in at Dr Ross's office yesterday. He is 20 3/4 pounds (9.4kg). A small weight gain from a month ago, but now that he walking, he is really burning up those calories!! He really loves his O's and goldfish and even tried coleslaw last night! I think he played with it more that he ate it, but he was fun to watch.

Camden has been a very busy little boy. A few months ago he slowly began crawling, and over the past souple weeks he has able to walk across the room!!! He has the biggest smile on his face when he plops down on the floor! then he claps. He is well on his way to keeping up with Maddie! Now I can really see myself being pulled in two different directions soon!! I will upload pictures soon!!
Posted by Tonya at 8:22 PM No comments: 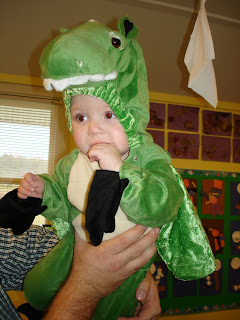 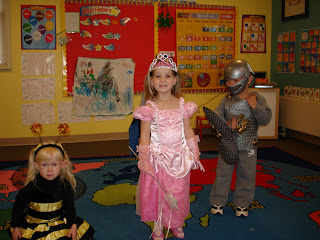 Parkside had their annual Halloween party for the kids on Thursday. We both were able to go over and help Maddie's class with the party and snacks. Then we tried to have a class photo. It was very hard to get 20 kids to all sit still, look forward, and all smile on cue. It did not happen for us. I guess that's why we are not professional photographers!! Andy then held Camden as the parade of costumes travelled throughout the day care. The kids had great costumes, there were several princesses and super heroes in Maddie's class. 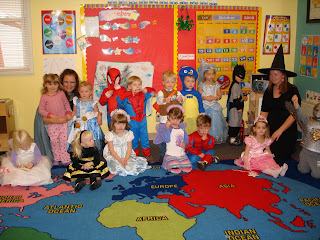 The kids had a blast trick-or-treating on Halloween! We visited several houses around Bangor, and showed off their costumes. We even ran into several people we knew while out around. Maple street was a very busy street! After trick-or-treating, we took the kids over to the hospital to show everyone their costumes. Maddie kept saying "Look at me! I am so preety!!"
The kids were tired and went to bed by 8pm that night! 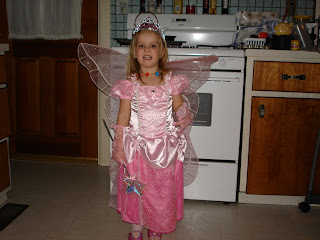 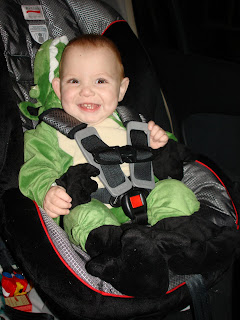 Camden's Trip to Clinic and NJ 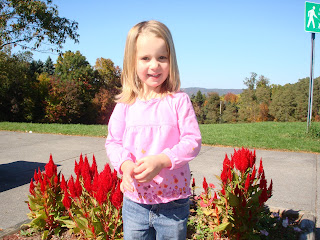 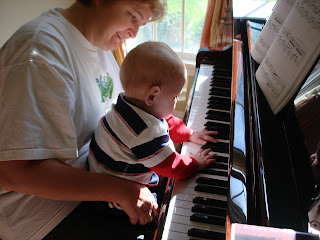 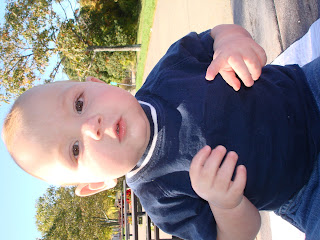 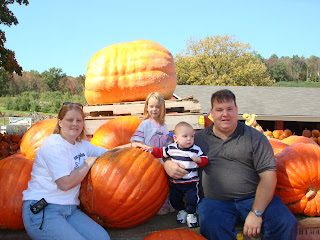 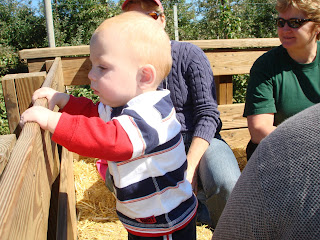 Thursday, the Brown family packed up the car and headed south to Boston for clinic. Camden's appointment was at 1pm and we left early to have lunch at Hotel Hanson's beforehand. Marjorie and Mark also watched Maddie while we were in clinic. Camden's visit went very well. We saw many of his team and they were all very happy with his progress and how healthy he looks. His weight was 20 1/4 pounds. The docs also gave us the green light to keep introducing foods, and give him back his yogurt! Our new goal is to reduce his night feeds from 10 ounces to 5 and increase his daily oral intake by the 5 ounces. It has not been easy yet. If we can accomplish this goal by our next appointment in Feb. 2009, and he is not needing any boluses or night tube feedings, we can get the G tube removed at that Feb. clinic visit!!! We can then convert from formula to regular, whole milk!! I cannot even imagine NOT mixing formula anymore!! It would be awesome!
Dr Jaskic also invited us to be present during a lecture he is giving to the entire medical student body at Harvard University, but I am not sure if another trip to Boston will fit into our schedules in early November. But what an honor!
Andy and I then took Camden to 10 East to visit and show him off! We then headed back to Hotel Hanson for a great dinner and relaxation.
Friday morning, we again packed up the car and headed 4 more hours south to the Foley-Brown B & B to visit with Andy's sisters. We arrived about 4 pm. The kids napped some in the car and did a great job! We enjoyed another great meal and relaxed some more! Maddie even tried out Wii games! Saturday was a beautiful day in NJ. Clear blue sky and warm, in the low 70's. After breakfast Maddie helped Flo make toys for their birds and did an awesome job with her coordination and selection of beads and toys to hang in the cage.
We all went to a huge farm about 5 miles from the B&B and looked at all the variety of pumpkins. We then went on a hay ride around the farm. We all enjoyed that, even Camden!! After 20 minutes we got off and were allowed one pumpkin each. Maddie then played in a great children's area and hay maze. it was lunch time, so we got hot dogs there on the farm and doughnuts (one free for each of us with the hay ride) and had a picnic! Maddie then tried her hand at pumpkin sling shot! She did really well with some help from Andy and I.
We then returned to the B&B for naps for the kids and Nancy, Flo and I went shopping for a new car seat for Camden, now that he can officially turn around and face front. We found a great one and bought it on the spot.
Sunday we headed back to Hotel Hanson and enjoyed yet another great meal and rested from the 4 hour trip back. Monday we headed home and arrived about 2 pm.
While we were gone, Camden developed a horrible cough and Monday afternoon we were able to get him into the doctor's office, but we were told it was probably just croup and to keep Motrin and warm showers going, which we were already doing. Tuesday the kids returned to daycare and our crazy lives keep moving foreword.
Posted by Tonya at 8:21 PM 3 comments: 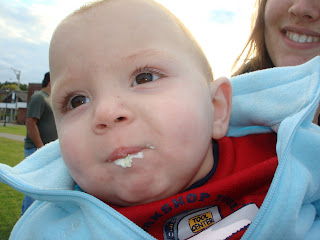 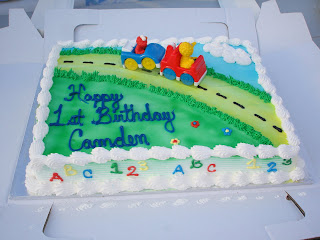 The weather cooperated and we had Camden's first birthday party yesterday!! Many friends and family were there and we had a great afternoon. Camden even tried a bite or two of frosting from his cake (don't tell Andy!!) and he really liked it! We all had hamburgers and hot dogs (thanks Steve!) and the kids had lots of room to play, run, and climb on the playground. It was a great success!!
The BBQ was also to thank everyone who has supported us during the past year, Camden and the Brown family would not be were we are now without all your support. It has been humbling to be graced by all the love and support. THANK YOU!! 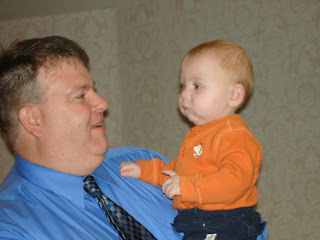 Thursday is a clinic appointment at Children's Hospital. We will be leaving at dawn Thursday morning to be in town for a 1pm visit. I cannot wait for the staff to see how big he is and how much he has changed since we saw them in May. We then have a reservation at Hotel Hanson for Thursday night, we are looking foreword to seeing them again! Friday through Sunday we will be in NJ at the Brown-Foley B + B! Then we plan to spend Sunday back at Hotel Hanson, before returning home Monday am, to start another hectic week. Whew!!
Posted by Tonya at 4:38 PM 1 comment: